History of Henry and Sarah Addington

HENRY AND SARAH ADDINGTON are the first ancestors of this line of Addington families known to be in this country who are confirmed by recorded documents. HENRY ADDINGTON was born approximately 1720, probably in Bucks County, Pennsylvania although family legend says he was born in London. He died 25 July 1787 in the 96th District, Union County, South Carolina. SARAH “BURSON” ADDINGTON was born approximately 1723/1726 in Pennsylvania, and died 14 March 1826 in Richmond, Wayne County, Indiana.

The parents of HENRY and SARAH are not confirmed. HENRY may be the son of JOHN and ELIZABETH ADDINGTON of Bucks County, Pennsylvania. SARAH’s family name of “BURSON” has not been certified, but has been written in family histories as Sarah Burson, Sarah Buson, Elizabeth Burson, Elizabeth Buson and Sarah Elizabeth Burson.” She may be the daughter of JOSEPH BURSON and RACHEL POTTS.

The BURSON family were Quakers. There is no evidence to indicate that the ADDINGTONs were Quakers. There is the possibility that SARAH was condemned for marrying outside the church and would not have been readmitted unless her husband became a Quaker. Evidently, HENRY ADDINGTON never joined the Quaker denomination even though he lived in Quaker neighborhoods and some of his children became Quakers.

It is believed that HENRY ADDINGTON married SARAH in Bucks County, Pennsylvania, and five of their children were born there. The sixth child may have been born there also.

A lives-lease agreement, dated 12 September 1765, with George William Fairfax of Loudoun County, Virginia, is the earliest confirmed record of HENRY ADDINGTON. The lease for 150 acres near the Potomac River names his wife, SARAH and their youngest son WILLIAM. HENRY built a log house with seven rooms, a root cellar, and four fireplaces on this property in 1767, in accordance with the lease agreement. The house is listed on the Historical Register. It has been restored, modernized, and is being lived in today. On 17 June 1768, he transferred the lease to Charles Snyder for 80 poundscurrent money.

The lure of better land and land grants drew the neighboring families of Thomas Lamb, John Martindale and John Gore from Virginia to Berkley (now Union) County, South Carolina. HENRY and SARAH joined the migration and moved their family to South Carolina about 1772.

On 11 August 1774, HENRY ADDINGTON received a land grant from King George III for 250 acres on Enoree River between John’s Creek and Frenchman’s Creek in 96th District, South Carolina. HENRY and SARAH were living on this farm when HENRY died in 1787. See alternate page for Henry's will.

HENRY gave to his son, WILLIAM, the responsibility for the care of SARAH in his will. But, SARAH, did not stay with WILLIAM but moved to Indiana in 1806 with her son, John. SARAH is presumed to have been buried in Friends Community Cemetery, Chester, Indiana. Her obituary in the Richmond, Indiana Public Ledger of 25 March 1826 gives her age as 100 years. The 1857 Directory of Richmond, Indiana lists early settlers including JOHN ADDINGTON and states “ADDINGTON’s mother came with him, died at 103 years of age.” There is no record of SARAH ADDINGTON ever becoming a Quaker.

The above history taken from the book: Addington, The Family of Henry and Sarah Addington, beginning in Bucks County, Pennsylvania, 1996, by Veda Addington Lindsey.

Notice in the 25 Mar 1826 Richmond Ledger "DIED - on the 14th of this month, a few miles of this place, SARAH ADDINGTON, aged one hundred years"


From a History of Wayne County, Indiana, a listing of early settlers listing John Addington and his mother Sarah Addington (age at death 103) as arriving in the county in 1806. 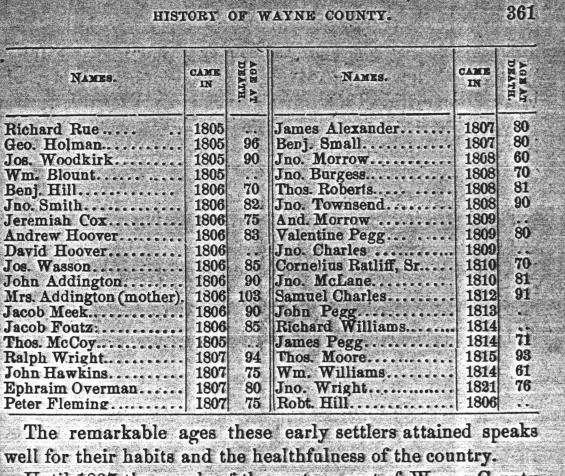