The very successful 1999 Addington Family Reunion was held on July 30 and 31 in Franklin, North Carolina.

Veda Lindsey, Caroline Kimsey, June Ponder and Jane Edwards served as reunion coordinators and did a wonderful job in making arrangements. The reunion started on Friday night with a family reception at Memorial Hall of the First United Methodist Church in downtown Franklin on Harrison Avenue.

Our ancestor William Addington, a Revolutionary soldier, is buried in the cemetery behind the First United Methodist Church. Family members strolled out to view his grave and the plaque planted there in 1986 to commemorate his service in the war.

Saturdays formal activities were held at the Macon County Community Center on Highway 441 South. Registration began at 8:30 AM with the formal program beginning shortly after 9 AM. A total of 51 family members and guests were in attendance. Thanks to June Ponder for handling the registration and membership renewals.

Jane Edwards introduced our primary speaker, Barbara McRae, who is a very active member in the Macon County Historical Society. Barbara presented a delightful talk on the early history of Macon County and the pioneer lifestyle. Land and how to get hold of it dominated much of the early pioneer focus. Barbara talked extensively about one of our ancestors, Henry Addington, a son of William Addington. Henry moved to Macon County in 1820 and acquired land about 4 miles south of the town of Franklin where he built his farm. Henry was quite successful and eventually acquired over 1,000 acres in Macon County plus many more acres of forests.

Barbara told the story of the Addington Mill. The Addington Mill was a water powered grist mile built in 1861 by James Brownlow Addington, a son of Henry Addington. The mill, which ground corn, wheat, and rye, was operated by the Addington Family for 96 years. The mill was dismantled in the 1971 and reconstructed on the Frontier Trail at Cedar Point Amusement Park in Sandusky, Ohio, where it can be seen to this day. Below is a photo of the mill as it stood on Skeenah Creek in 1961.

Barbara ended her talk with an invitation to visit the Macon County Historical Society Museum in Franklin. The museum was opened from 2-4 PM exclusively for our reunion. Thank you Barbara for spending your time with us.

After more socializing, a delicious lunch was served by City Restaurant.

No formal afternoon activities were scheduled. Many family members went to visit Macon County sites associated with the Addington family.

The Macon County Historical Museum was open special hours for our reunion with many members stopping by. The museum contains four volumes of family records that went into the 1989 book by Naomi Addington Patterson and Mary Jane Edwards. 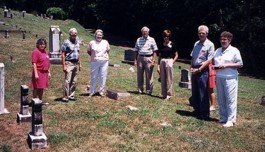 Some family members visited the Mt. Zion Cemetery, Cartoogechaye Churchyard, about 5 miles southwest of Franklin on US 64 where several ancestors including Moses Addington (1793-1858) and his wife are buried. 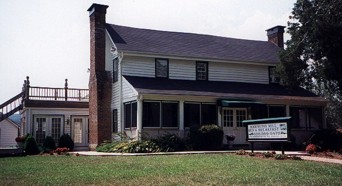 The old Addington homestead was originally built in 1822 by Henry Addington. It has been updated over the years and was recently opened as a bed and breakfast. The house is beautiful inside and out. The owners, Jerry and Pat Robinet, were most gracious to several groups of family members. They gave freely of their knowledge and insight into the history of the house and the Addington family. Inside the house, one can see one of the original walls to the cabin built in 1822. The Addington Mill was built directly across from this house on Skeenah Creek.
You can get to the Addington Mill Bed and Breakfast by taking highway 23/441 about 4 miles south of Franklin, then taking Addington Bridge Road west about 1.5 miles. The address for the Addington Mill Bed and Breakfast is 935 Addington Bridge Road, Franklin, NC.

From the Addington Mill Bed and Breakfast, the Addington Cemetery is about 400 yards northeast along Addington Bridge Road and then about 200 yards south off a dirt road. Buried there are Henry Addington, grandson of Henry and Sarah Addington (1789-1878) and his wife Mary Weaver (1795-1859), James Brownlow Addington (1831-1914) and several of their descendants.

The 1998 Addington Family Reunion was held in Amory, Mississippi. The Association honored two of our founders who are no longer with us, Naomi Louise Addington Patterson and Bobby Dean Patterson, by the donation of 3 family books to the Evans Memorial Library in Aberdeen. The Mayor of Amory talked to us about the history of the region. Two surprise dancers showed up during our entertainment time. 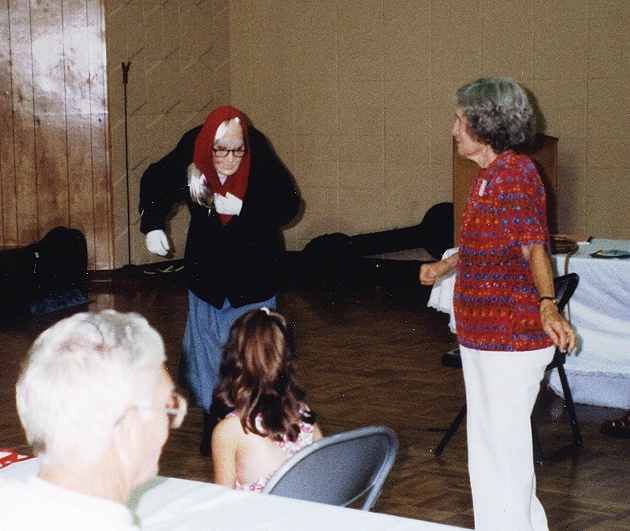 The 1997 Addington Reunion was held in Blairsville, Georgia. There were 63 adults and 3 children in attendance.


Milltown Farm, 2.5 miles north of Waterford, Virginia was built around a log cabin that was probably built by the Henry Addington Family in 1765-1768. The house was renovated, enlarged and modernized in 1975 and is currently operated as a Bed and Breakfast. The 1996 Addington Family Reunion was held in Leesburg, Virginia and included a visit to Milltown Farm.

The 1995 Addington Family Reunion was held in Jay, Oklahoma on August 4.


The 1994 Addington Family Reunion was held in Richmond, Indiana on August 19 and 20 with over 100 members and friends in attendance.

Family members visited the Friends Cemetery in Chester, Indiana where Sarah Addington is most likely buried. There is no gravestone for Sarah with many of the oldest gravesites bare or eroded stones. William Addington, a grandson of Henry and Sarah Addington sold the Chester Society of Friends the land for the church and graveyard. The church no longer exists. 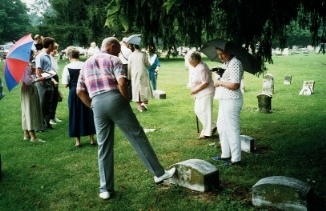 The 1993 Addington Family Reunion was held in Amory, Mississippi on August 21 with about 80 members and friends in attendance.


The 1992 Addington Family Reunion was held at Padgett's Creek Baptist Church in Union County, South Carolina. The 1992 Reunion included a tour to the land that Henry Addington was granted by charter in 1774. The ruins of an old house with only the chimney standing may date from that time. 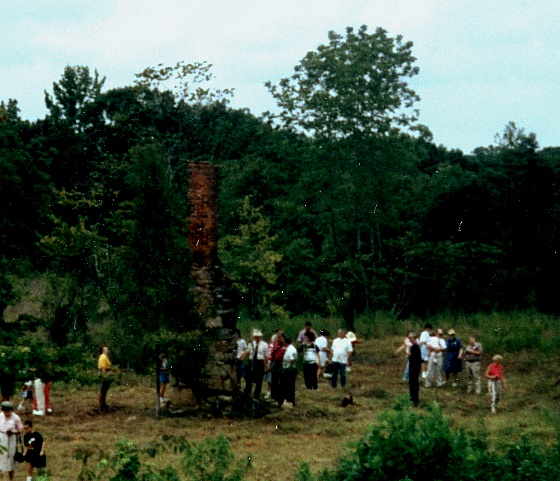 
The 1991 Addington Family Reunion was held on Saturday, August 17 at the Macon County Recreation Building in Franklin, North Carolina.


The 1990 Addington Family Reunion was held on August 18 at the Ivy Log Baptist Church in Blairsville, Georgia with 86 Addington relatives and friends present.


The 1989 Addington Family Reunion was held in Blairsville, GA with a Friday night August 18 social at the First Baptist Church and the reunion at the Ivy Log Baptist Church on Saturday with 87 relatives in attendance. The book Addington: a directory of the descendants of Henry and Sarah Addington of Union County, South Carolina by Naomi Addington Patterson and Mary Jane Edwards was distributed. Naomi, who had done so much of the early work, died of cancer in early October, 1988. Jane carried on and completed this wonderful book.


The 1988 Addington Family Reunion was held on August 20 in Guntersville, Alabama. It was decided to publish a book on the known descendants of Henry and Sarah Addington by the next reunion.